Today we look at the painting inspired design of the 2016 Diamond Kings release. 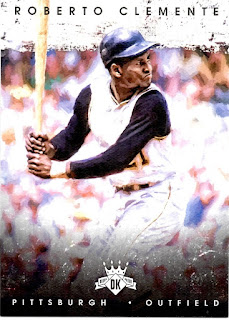 The lack of logos for "old timers" doesn't bother me so much. The card features a sleeveless jersey with a long sleeve undershirt worn by Clemente in their home uniform.  It appears that Clemente is wearing a wristband which I rarely seen him wear in other cardboard.

The back of the card features a neat fact about how Clemente switched to a heavier bat in 1961 which turned him from a career .288 hitter to winning the batting title that season with a .351 average. 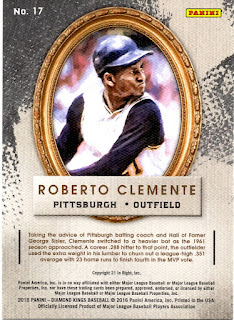 Posted by Collecting Cutch at 2:48 AM