A few years ago I discovered Topps sketch artist, Juan Rosales.  Since then I have gotten nearly a dozen Andrew McCutchen sketch cards from him.

A few weeks ago I put a message out on Twitter that I wanted to add more Roberto Clemente cards to my collection.

Juan sent me a message saying that his wife, Stephanie, created a card for 2018 Topps Museum Canvas Collection.

We came to a quick agreement on the price anda few days later the card below was in my possession. 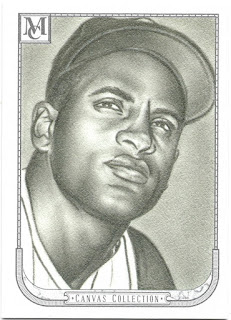 Stephanie created this incredible portrait of the first Latin ball player inducted into the Hall of Fame. 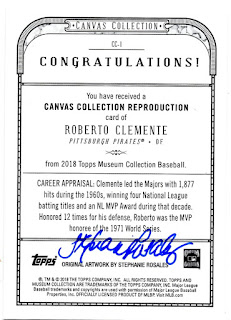 She signed the back of the card.

A few years ago MLB ran lots of commercials trying to get the youth back into baseball.  The campaign was called "Let The Kids Play".

The commercials featured some of the younger players in the game.


Topps has been utilizing the young "kids" of the game and giving them a chance to design their own baseball card set.  We have already seen sets designed by Bryce Harper, Francisco Lindor, and Fernando Tatis Jr.

One of Puerto Rico Heritage cards in the Lindor set features Roberto Clemente. 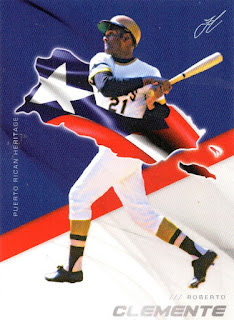 The card is beautifully designed and features the Puerto Rico flag in the background.  It is simple and classy. 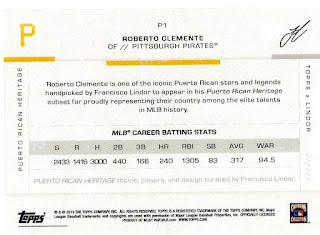 The back shows lifetime statistics of Clemente, a fascimile signature of Lindor, team logo, and a simple writeup of Clemente being picked for the Heritage set.
Posted by Collecting Cutch at 4:50 PM 1 comment:

Email ThisBlogThis!Share to TwitterShare to FacebookShare to Pinterest
Labels: 2019

I have been posting one of the Topps Project 2020 cards on average once a month.

This is the 3rd card that was released that reimagines the 1955 Roberto Clemente rookie card.

You can see the Mister Cartoon and Naturel versions by clicking their names.

At the top I shared the Naturel version card prices for Project 2020 were at an all time high and I was considering selling the ones I had to purchase an actual 1955 Topps Roberto Clemente.

I have decided to go forward with the set and building the Clemente cards. 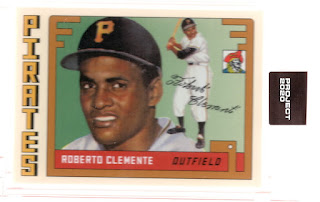 This, as previously stated, was the third Clemente to be released.  Since this card was released three more have been produced, with only one of them being in hand as of now. 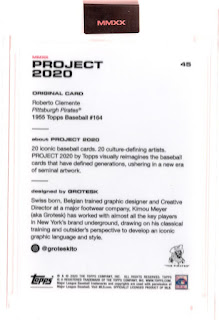 Grotesk is a Swiss born graphic designer and creative director for a footwear company.  He is one of the many artists that Topps brought in to get the "sneakerheads" interested in card collecting.

Many of his cards in the set thus far have a very similar style and I think would look great as a completed artist set.

His most expensive card in the set to no surprise was his first card, #7 in the set, of Bob Gibson.  That card which sold online at Topps.com for $19.99 on the day of release is now selling for upwards of a thousand dollars.

Posted by Collecting Cutch at 6:30 AM 2 comments:

Ever wonder what older vintage Topps designs would look like with the modern Rookie Card (RC) logo?

Well, you're in luck because Topps produced a series of manufactured rookie card medallion cards this year. 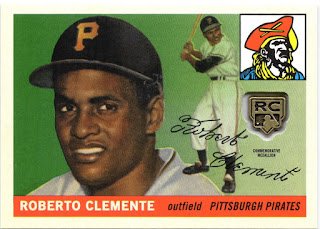 The 1955 Roberto Clemente rookie card got the RC treatment as part of it's Series 1 checklist. 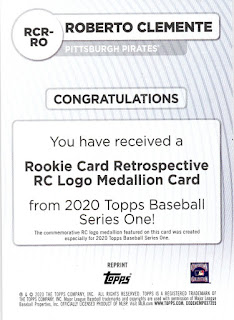 When all is said and done I will have at least 21 different versions of Roberto Clemente's rookie card added to my collection in 2020 thanks to the Project 2020 and this medallion card.

21 seems an appropriate number for the great 21.
Posted by Collecting Cutch at 6:10 PM 1 comment:

Every day on Monday through Friday, Topps reveals their latest pair of cards to be offered as part of the Topps Project 2020 set.

It was revealed during Blake Jamieson's Zoom Conference with Sophia Chang that her version of Roberto Clemente will be available tomorrow.

I really like all these different versions of Clemente's 1955 Topps card and am excited to see her take on it.

I have been picking up other Clemente art reproduction cards in sets lately, especially the Topps Museum Canvas Collection cards. 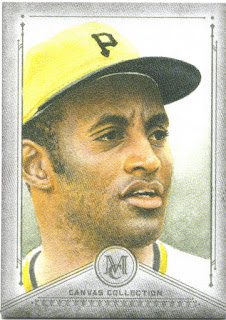 This card is from 2019 Topps Museum and is absolutely stunning.

Unlike the graphic designers or jewellers that are working on Project2020, you can tell that this was done by someone who does photorealistic paintings. 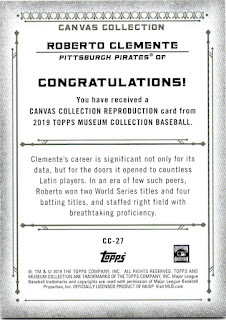 Art is a very subjective term, but ask anyone in the sketch card industry and they'll tell you...
"That is art"
When they look at how well the artist captured The Great Roberto Clemente.
Posted by Collecting Cutch at 4:49 PM 1 comment:

I got home today to find that my order from COMC that was placed and shipment requested over a month ago had arrived.  Among the nearly 200 card order were quite a few Roberto Clemente cards to go with a few dozen new cards for the Cutch PC.  There were some cards that will be going out to you guys as well including some 1/1s.

Lots of cool things to show off over the next month, that's for sure.

Here is just one of the new Clemente cards.  It's nothing special at all, just a basic insert from an unlicensed product. 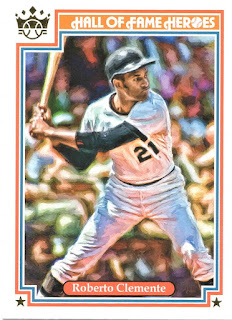 I love Diamond Kings.  It is my favorite unlicensed product that Panini puts out each year.  A few years ago Clemente was featured on the box art and ever since that year (2016 I think) I have always looked to add more Clemente cards from this brand. 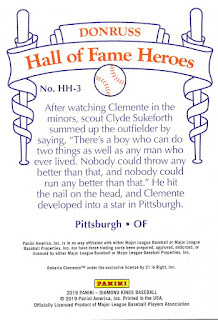 The card features a nostalgia Donruss design similar to something we would have seen produced around 1981.  I like the basic design and the short blurb on the back about Clemente's tools that often don't get enough credit, his cannon arm and ability to run from 1st to 3rd.

I have been actively seeking "older" color refractors that feature Roberto Clemente.  There are so many parallels in today's cards and a lot of the legendary players are showing up in every single release that Topps puts out.  That wasn't always the case, especially for products released before 2005.

I have discovered the pure beauty of the first few years of Topps Tribute and holy smokes are they awesome to look at. 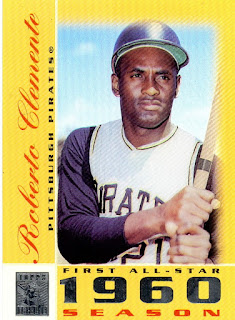 Back in April I picked up this gold parallel of Roberto Clemente from 2003 Topps Tribute.  The gold really pops on this card. 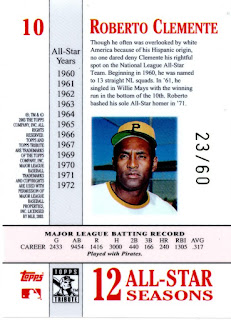 This card is numbered to only 60 copies and it commemorates Roberto's 1st of 12 All-Star seasons that began in 1960.
Posted by Collecting Cutch at 3:57 PM 1 comment:

I have a bunch of oddball Roberto Clemente cards to show off, but I thought this one was appropriate given the subject material I used on my main blog, Collecting Cutch.

Today I wrote about bad comic book movies and this 1980 Laughlin made me think about a really good comic movie.

I am unfamilar with Laughlin products, but I know a good laugh is always good. 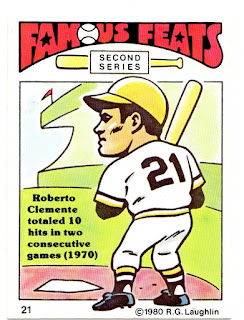 The Joker from 2019 starring Joaquin Phoenix is one of the best big screen adaptations of a comic book character ever.

When Jerry Robinson, Bob Kane, and Bill Finger put their creative efforts for the creation of Batman's archnemesis The Joker they used the 1928 horror film, The Man Who Laughs, as inspiration. 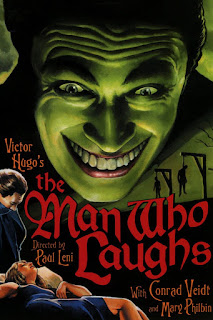 One look at the above poster and you can see the influence this movie had on the creation and imagery of The Joker. 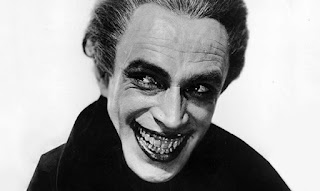 It becomes even more noticable in the above production photo.