Topps has really done a tremendous job in marketing their online exclusive cards in the past few years.  Not only does it cut back on costs, because the card's print runs are literally printed to whatever the demand is, they are also coming up with ideas to stay fresh to the current collecting environments.

Topps Now changed the way Topps began to print exclusive to what fans wanted.  They have continued that success with their Throwback Thursday and Living Set cards.

This year Topps introduced Project 2020.  The idea is unique.  Take 20 of the most iconic Topps cards and 20 unique artists to reimagine those cards.  Each artist will draw the selected 20 cards, giving fans a potential 400 card set.

Roberto Clemente's 1955 rookie card was selected as one of the subjects. 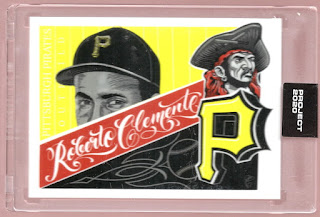 Legendary tattoo artist, Mister Cartoon, wad the first to put his spin on the card. 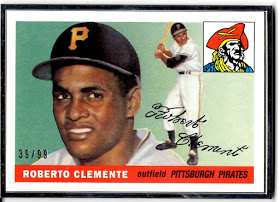 I showed off my framed rookie reprint a few years ago here. 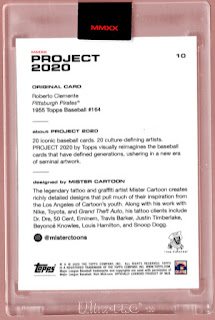 The backs of all the Project 2020 cards feature a brief bio about the artist along with details of the project and the original card.


What have your thoughts been on Project 2020?  Are you collecting any of them?
Posted by Collecting Cutch at 8:35 AM 3 comments:

Email ThisBlogThis!Share to TwitterShare to FacebookShare to Pinterest
Labels: 2020, project 2020

It was about 4 months ago that I posted my Secret Santa gift that Rod from Padrographs sent me.

You can revisit the entire post here from my main blog, Collecting Cutch.

I will show off all the cards he sent me again below so that it may count towards my goal of Chasing 3000.

Up first is the 1994 All-Star Game Donruss Diamond King with art by Dick Perez. 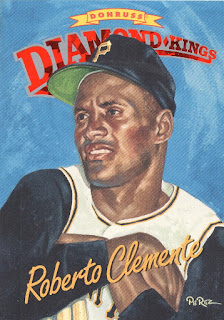 This card looks great and is part of a 5 card subset available for the 1994 All-Star Game, held in Pittsburgh. 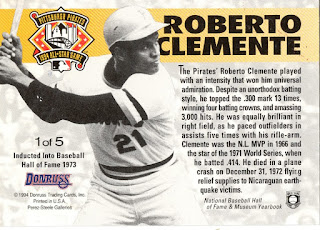 Here is a modern take on a vintage brand. 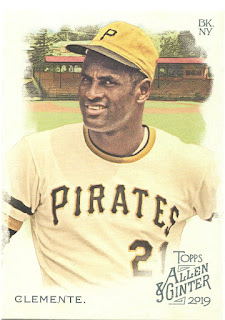 2019 Allen & Ginter
Clemente has become a staple in the modern version of this old card branding. 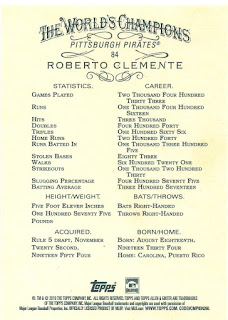 I think this is my only official Topps Chrome card of Clemente.  It is from 2019 and discusses Clemente impact on the 150th Year Anniversary of the great game of baseball. 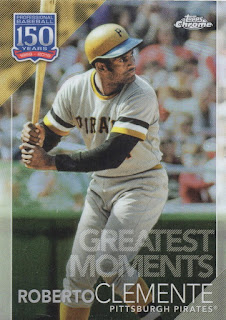 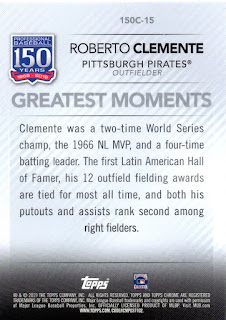 2 years earlier and this black parallel card from 2019 Faces of the Franchise would have pictured Andrew McCutchen instead of Starling Marte.
Wagner is the greatest Shortstop of All-Time.
Clemente is one of the game's greatest rightfielders of all-time and a 1st ballot Hall of Famer.
Marte became the "Face of the Franchise" for two years after Andrew McCutchen left.  While he was a solid player in Pittsburgh, he won't have the lasting impact that McCutchen had on the franchise. 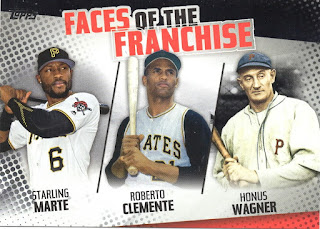 The black parallel is numbered to 299 copies. 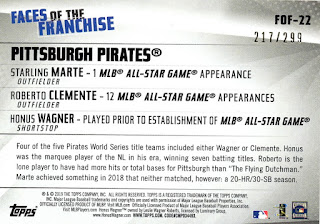 I know I said this before, but thank you,again Rod for the great Christmas gift.  I hope you,are staying safe.
Posted by Collecting Cutch at 3:40 PM 1 comment:

While browsing for some oddball Clemente cards to add to the collection, I came across a metal bordered card produced in Thailand from 1997. The card is produced by a company card Metallic Impressions. 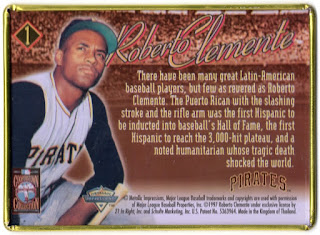 I had never heard of them and the pictures used are some of the more popular images of Roberto for cards.

The card appears to be a legit release based on copyright information.  It also has the Pirates logo and Cooperstown Collection logo.

It has an Action Packed mid 90s look and feel to it.
Posted by Collecting Cutch at 8:24 AM 1 comment:

As discussed on Monday, I really want to get this blog back up and running on a consistent basis.  So I have already drafted 4 additional posts to try and stay ahead of schedule.  Going forward I am planning on doing posts here every Monday, Wednesday, and Saturday.

It will be something that you can expect for the forseeable future. 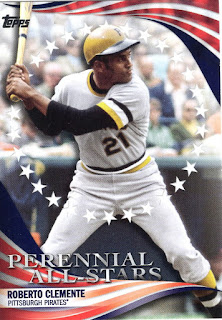 The set showcased players who were All-Stars year in and year out. 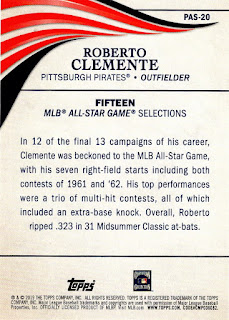 The back discusses Clemente's 15 All-Star appearances of which he batted .323 in 31 at bats.
Posted by Collecting Cutch at 8:57 AM 1 comment:

Wow! It's been a long time since I posted on this blog.

With the lack of current baseball games I have been watching older games from the 90s.  One team that I am shocked that didn't win a World Series Championship was the Cleveland Indians teams from the mid 90s, specifically the team from 1995.

There is a case to be made that the team had 6 Hall of Famers in the batting lineup every day or the first option off the bench.  Three are already in the Hall of Fame (Eddie Murray, Dave Winfield, Jim Thome).  There is a strong case that could be made for Omar Vizquel.  Manny Ramirez would have been an automatic Hall of Famer if not for failing a PED test.  Kenny Lofton should be considered one of the best centerfielders of the 90s with a 68.4 career WAR, .299 batting average, 4 gold gloves, 6 All-Star appearances, and 622 stolen bases (15th All Time).

With that kind of thump I haven't even mentioned Albert Belle who is the only player in MLB history to hit 50HR and 50 doubles in a single season.

How about the catching tandem of Sandy Alomar Jr. and Tony Pena?  Talk about a couple of great defensive backdrops.

Before Baerga's 25th birthday, the Puerto Rican native had done something no other second baseman had done in MLB history.  He collected over 200 hits, drove in over 100 RBI, and smashed 20 homers.

Baerga was on the path to superstar before a series of injuries ultimately derailed his career and made him a bench bat for many years.

Baerga often cited Roberto Clemente as his hero growing up and in 1999 fans who attended his charity softball event could receive a card of "The Great One". 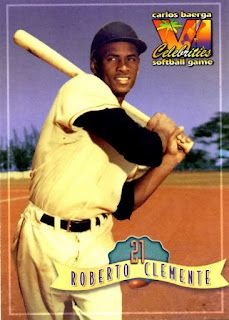 This is the kind of Clemente cards I really want to add to my collection as I get back to updating this blog on a more regular basis. 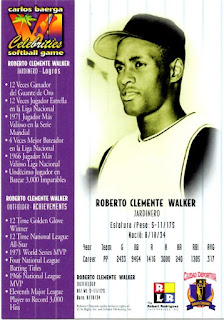