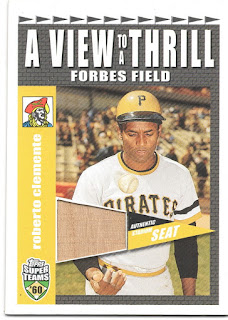 I decided to show off this 2002 Topps Super Teams Forbes Seat Relic card because it relates to the last card I showed on this blog. 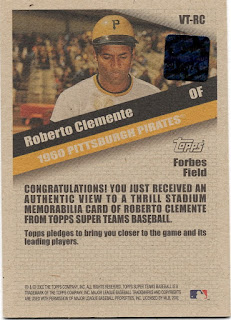 These relic cards were found in the now defunct Topps Super Teams card release.  The relics were part of a set of old stadium benches and seats purchased by Topps and subsequently cut up for multiple card releases.  I have a few different Forbes Field relics, but the image used on this card is what I really like about this "A View To A Thrill"

The image matches Roberto Clemente's 1972 card release image (his last LIVING release) and was also used in the 1987 Turn Back The Clock release.


A lot of these old stadium seat relics can be had very cheaply compared to other style relics of the same player.

Now granted all Clemente did was sit his butt down on the bench in the dugout, but the presentation of this card looks awesome!

Do you have any stadium seat or clubhouse bench relics in your collection?
Posted by Collecting Cutch at 3:35 PM