The Pittsburgh Pirates and Cincinnati Reds got into another near altercation yesterday when Clay Holmes of the Pirates hit Eugenio Suarez on the hand.  Reds manager, David Bell, believed it,was on purpose and would eventually be tossed for arguing about it.

The Reds and Pirates have had a lot of skirmishes in the past and in 2012-2016 no two teams hit more batters than these two against each other.

The Reds and Pirates had some battles in the 70s too when the Pittsburgh Lumber Company would be competing for the NL pennant against the Big Red Machine.

The Reds are celebrating their 150th anniversary this year as being a professional major league team. 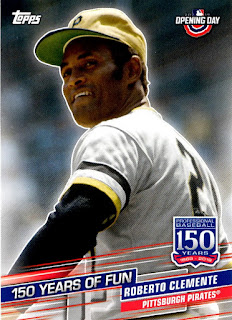 150 Years of Fun is the insert set to chase 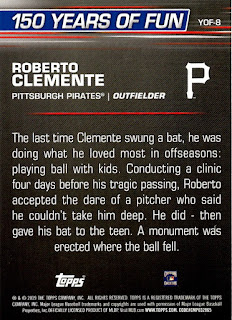 The back goes on to show how much of a great humanitarian Clemente was as just a few days before his passing he was holding a baseball clinic for young kids.

On a completely unrelated note, please pray for the family of the little girl hit at the Astros game yesterday.
Posted by Collecting Cutch at 7:39 AM