I recently purchased this oddball of Roberto Clemente. 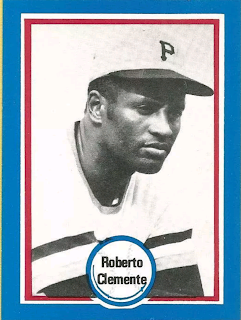 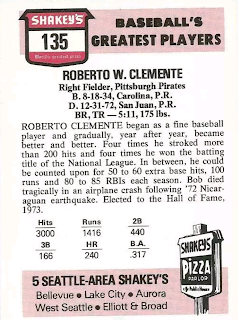 Copies of this card can range from $7 to $200 depending on condition and how much the seller values oddball food release products.

Shakey's was the first franchise pizza restaurant in the United States.  Before Pizza Hut, Little Caesar's, Dominos, Papa John, etc there was Shakey's!

Founded in 1954, the chain rose to immediate fame and by the late sixties it had almost 400 chains across the United States.  Currently the chain has 500 locations globally of which only 51 are operated nationally.

Shakey's made a cameo in the movie Wayne's World when Benjamin and his girlfriend are eating Shakey's in the bedroom. 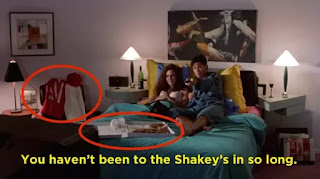 Shakey's produced two series of baseball cards in the seventies (1975 and 1976).

Both card series feature some of the game's greatest players.
Posted by Collecting Cutch at 12:26 PM