2014 continued a trend by Topps to insert minis of vintage designs in their flagship set.

Oddly enough the set they chose to represent was the 25th anniversary of the 1989 design.  They didn't label them as 25th anniversary designs, but used the same look of those cards, but made them into a die cut mini. 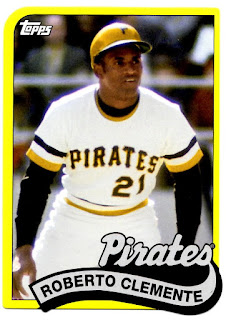 The white borders that would have been on the card were removed entirely to,create a die cut curved upper left and lower right corner on the cards. 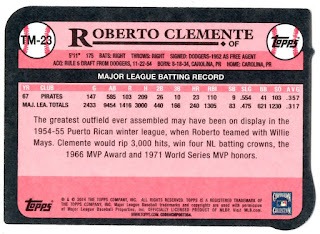 The backs were numbered TM (Topps Mini) and featured some of the best active players in the game along with several legends that had long since retired.

The back has limited stats, but does feature a pretty unique fact.  Could you imagine an outfield with Willie Mays in center and Roberto Clemente in right?

That would have been amazing to witness.
Posted by Collecting Cutch at 4:29 PM